It is not currently known just when the Waterperry ice house was built. The assumption is that it would have been built at the same time as the major extension work was done on Waterperry House, in 1713. However, it may have been built later in the 18th century. There is a nearby artificial lake (the ‘cut’) which fills from the river Thame during flood situations, and we suspect this was built primarily to supply ice to the ice house, and that the spoil from creating this lake was used to form the clearly artificial mound over the ice house.

The ice house itself comprises a twin-walled brick chamber, roughly the shape of an ice cream cone (with one scoop!). It has a diameter of around 9′ (2.7m) at its widest part, tapering down to about 7′ (2.1m) at the bottom. It is around 15′ (4.5m) deep from top of the cone to the bottom. The ice house is a fine piece of engineering, with the dome made with ‘rubbed’ bricks to get the necessary shape (bricks would have been rubbed together to wear away enough to give an angled join), and effectively has one ‘cone’ built inside another. It is in excellent condition.

Assuming ice would have been packed in with bales of straw 6″ diameter (150mm) against the wall, right up to the bottom edge of the access archway, the ice house could hold nearly 9 cubic metres of ice, something like 8 tonnes. The house could then be supplied with over 20kg of ice each day (approximately 2 full buckets) for year with one filling of the ice house.

Access to the chamber is via a tunnel, some 6′ 6″ (2m) high and 4′ (1.2m) wide. This is currently around 23′ (7m) long although may once have been longer. Unlike the ice house, this tunnel was not in good condition – in fact we are not quite sure why it had not collapsed! 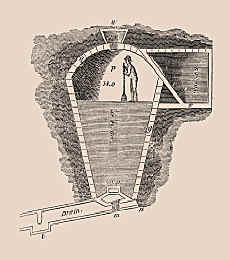 By October 2017 we completed the work on the tunnel, and restored the earth above it, and to this day are still busy with ongoing conservation work on the Ice House.